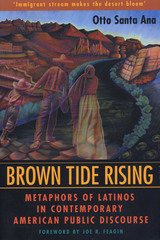 . . . awash under a brown tide . . . the relentless flow of immigrants . . . like waves on a beach, these human flows are remaking the face of America . . . Since 1993, metaphorical language such as this has permeated mainstream media reporting on the United States’ growing Latino population. In this groundbreaking book, Otto Santa Ana argues that far from being mere figures of speech, such metaphors produce and sustain negative public perceptions of the Latino community and its place in American society, precluding the view that Latinos are vested with the same rights and privileges as other citizens. Applying the insights of cognitive metaphor theory to an extensive natural language data set drawn from hundreds of articles in the Los Angeles Times and other media, Santa Ana reveals how metaphorical language portrays Latinos as invaders, outsiders, burdens, parasites, diseases, animals, and weeds. He convincingly demonstrates that three anti-Latino referenda passed in California because of such imagery, particularly the infamous anti-immigrant measure, Proposition 187. Santa Ana illustrates how Proposition 209 organizers broadcast compelling new metaphors about racism to persuade an electorate that had previously supported affirmative action to ban it. He also shows how Proposition 227 supporters used antiquated metaphors for learning, school, and language to blame Latino children’s speech—rather than gross structural inequity—for their schools’ failure to educate them. Santa Ana concludes by calling for the creation of insurgent metaphors to contest oppressive U.S. public discourse about minority communities.
AUTHOR BIOGRAPHY
Otto Santa Ana is a founder and professor of the César Chávez Center for Chicana and Chicano Studies at UCLA.
TABLE OF CONTENTS