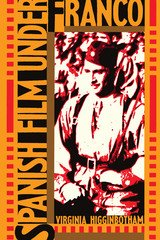 How does a totalitarian government influence the arts, and how do the arts respond? Spanish Film Under Franco raises these important questions, giving English speakers a starting point in their study of Spanish cinema. After a brief overview of Spanish film before Franco, the author proceeds to a discussion of censorship as practiced by the Franco regime. The response of directors to censorship—the “franquista aesthetic,” or “aesthetic of repression,” with its highly metaphorical, oblique style—is explored in the works of Luis Buñuel, Carlos Saura, Juan Antonio Bardem, Luis García Berlanga, and other important directors. Virginia Higginbotham combines historical perspective with detailed critical analysis and interpretation of many famous Franco-era films. She shows how directors managed to evade the censors and raise public awareness of issuesrelating to the Spanish Civil War and the repressions of the Franco regime.Film has always performed an educational function in Spain, reaching masses of poor and uneducated citizens. And sometimes, as this study also reveals, Spanish film has been ignored when the questions it raised became too painful or demanding. The author concludes with a look at post-Franco cinema and the directions it has taken. For anyone interested in modern Spanish film, this book will be essential reading.
AUTHOR BIOGRAPHY
Virginia Higginbotham is Associate Professor Emeritus of Spanish at the University of Texas at Austin and the author of several books.
TABLE OF CONTENTS