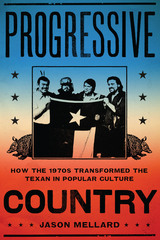 During the early 1970s, the nation’s turbulence was keenly reflected in Austin’s kaleidoscopic cultural movements, particularly in the city’s progressive country music scene. Capturing a pivotal chapter in American social history, Progressive Country maps the conflicted iconography of “the Texan” during the ’70s and its impact on the cultural politics of subsequent decades.

This richly textured tour spans the notion of the “cosmic cowboy,” the intellectual history of University of Texas folklore and historiography programs, and the complicated political history of late-twentieth-century Texas. Jason Mellard analyzes the complex relationship between Anglo-Texan masculinity and regional and national identities, drawing on cultural studies, American studies, and political science to trace the implications and representations of the multi-faceted personas that shaped the face of powerful social justice movements. From the death of Lyndon Johnson to Willie Nelson’s picnics, from the United Farm Workers’ marches on Austin to the spectacle of Texas Chic on the streets of New York City, Texas mattered in these years not simply as a place, but as a repository of longstanding American myths and symbols at a historic moment in which that mythology was being deeply contested.

Delivering a fresh take on the meaning and power of “the Texan” and its repercussions for American history, this detail-rich exploration reframes the implications of a populist moment that continues to inspire progressive change.

Jason Mellard is Assistant Director of the Center for Texas Music History at Texas State University–San Marcos, where he also teaches in the Department of History.