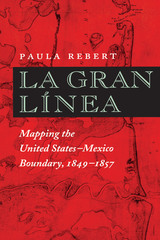 The Treaty of Guadalupe Hildalgo, which officially ended the U.S.-Mexican War in 1848, cost Mexico half its territory, while the United States gained land that became California, Nevada, Utah, Texas, and parts of Colorado, Arizona, and New Mexico. Because the new United States-Mexico border ran through territory that was still incompletely mapped, the treaty also called for government commissions from both nations to locate and mark the boundary on the ground. This book documents the accomplishments of both the U.S. and the Mexican Boundary Commissions that mapped the boundary between 1849 and 1857, as well as the fifty-four pairs of maps produced by their efforts and the ongoing importance of these historical maps in current boundary administration. Paula Rebert explores how, despite the efforts of both commissions to draw neutral, scientific maps, the actual maps that resulted from their efforts reflected the differing goals and outlooks of the two countries. She also traces how the differences between the U.S. and Mexican maps have had important consequences for the history of the boundary.

AUTHOR BIOGRAPHY
Paula Rebert is an independent scholar with a Ph.D. in the History of Cartography from the University of Wisconsin–Madison.
TABLE OF CONTENTS