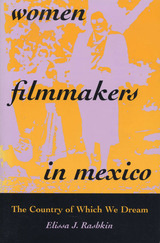 Women filmmakers in Mexico were rare until the 1980s and 1990s, when women began to direct feature films in unprecedented numbers. Their films have won acclaim at home and abroad, and the filmmakers have become key figures in contemporary Mexican cinema. In this book, Elissa Rashkin documents how and why women filmmakers have achieved these successes, as she explores how the women's movement, film studies programs, governmental film policy, and the transformation of the intellectual sector since the 1960s have all affected women's filmmaking in Mexico.

After a historical overview of Mexican women's filmmaking from the 1930s onward, Rashkin focuses on the work of five contemporary directors—Marisa Sistach, Busi Cortés, Guita Schyfter, María Novaro, and Dana Rotberg. Portraying the filmmakers as intellectuals participating in the public life of the nation, Rashkin examines how these directors have addressed questions of national identity through their films, replacing the patriarchal images and stereotypes of the classic Mexican cinema with feminist visions of a democratic and tolerant society.

AUTHOR BIOGRAPHY
Elissa J. Rashkin is an independent writer and scholar based in Mexico City and Portland, Oregon. She holds a Ph.D. in Communication Studies from the University of Iowa.
REVIEWS
This is simply the most significant analysis of contemporary Mexican cinema to date, and it will make an incalculably important contribution to the field. . . . Rashkin’s incisive analyses and brilliant juxtaposition of cultural and socio-political determinants will become the new standard that other scholars will seek to emulate.
— Ana M. López, Associate Professor of Film Studies and Communication, Tulane University