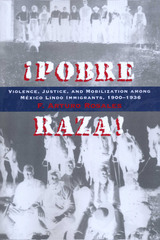 Fleeing the social and political turmoil spawned by the Mexican Revolution, massive numbers of Mexican immigrants entered the southwestern United States in the early decades of the twentieth century. But instead of finding refuge, many encountered harsh, anti-Mexican attitudes and violence from an Anglo population frightened by the influx of foreigners and angered by anti-American sentiments in Mexico.

This book examines the response of Mexican immigrants to Anglo American prejudice and violence early in the twentieth century. Drawing on archival sources from both sides of the border, Arturo Rosales traces the rise of "México Lindo" nationalism and the efforts of Mexican consuls to help poor Mexican immigrants defend themselves against abuses and flagrant civil rights violations by Anglo citizens, police, and the U.S. judicial system. This research illuminates a dark era in which civilian and police brutality, prejudice in the courtroom, and disproportionate arrest, conviction, and capital punishment rates too often characterized justice for Mexican Americans.