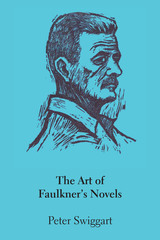 BUY FROM
The Art of Faulkner's Novels
by Peter Swiggart
University of Texas Press, 1962
eISBN: 978-0-292-76938-0
Paper: 978-0-292-76937-3
To say that the entirety of human experience can be a novelist’s theme is to voice an absurdity. But, as Peter Swiggart convincingly argues, Faulkner’s work can be viewed as an extraordinary attempt to transform the panorama of man’s social experience into thematic material. Faulkner’s two-dimensional characters, his rhetorical circumlocutions, and his technical experiments are efforts to achieve a dramatic focus upon material too unwieldy, at least in principle, for any kind of fictional condensation. Faulkner makes use of devices of stylization that apply to virtually every aspect of his successful novels. For example, the complex facts of Southern history and culture are reduced to the scale of a simplified and yet grandiose social mythology: the degeneration of the white aristocracy, the rise of Snopesism, and the white Southerner’s gradual recognition of his latent sense of racial guilt. Within Faulkner’s fictional universe, human psychology takes the form of absolute distinctions between puritan and nonpuritan characters, between individuals corrupted by moral rationality and those who are simultaneously free of moral corruption and social involvement. In this way Faulkner is able to create the impression of a comprehensive treatment of important social concerns and universal moral issues. Like Henry James, he makes as much as he can of clearly defined dramatic events, until they seem to echo the potential complexity and depth of situations outside the realm of fiction. When this technique is successful the reader is left with the impression that he knows a Faulkner character far better than he could know an actual person. At the same time, the character retains the atmosphere of complexity and mystery imposed upon it by Faulkner’s handling of style and structure. This method of characterization reflects Faulkner’s simplifications of experience and yet suggests the inadequacy of any rigid interpretation of actual behavior. The reader is supplied with special eyeglasses through which the tragedy of the South, as well as humanity’s general inhumanity to itself, can be viewed in a perspective of simultaneous mystery and symbolic clarity.
AUTHOR BIOGRAPHY
Peter Swiggart (1927–2004) was Professor of English at Brandeis University.
TABLE OF CONTENTS


PrefacePart One: Faulkner’s Narrative World1. Faulkner as Romancer2. Themes and Techniques3. The Use of Social Myth4. Man against Nature5. Experiments in NarrationPart Two: The Major Novels6. Rage against Time: The Sound and the Fury7. A Modern Mock-Epic: As I Lay Dying8. The Puritan Sinner: Light in August9. A Puritan Tragedy: Absalom, Absalom!Part Three: Later Works10. From Go Down, Moses to A Fable11. The Snopes TrilogyA Note on The ReiversSelected Faulkner WorksIndex