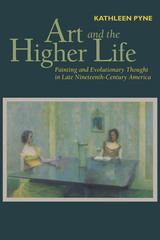 Art and the Higher Life: Painting and Evolutionary Thought in Late Nineteenth-Century America
by Kathleen Pyne
University of Texas Press, 1996
Paper: 978-0-292-76920-5
eISBN: 978-0-292-76921-2
Late in the nineteenth century, many Americans were troubled by the theories of Charles Darwin, which contradicted both traditional Christian teachings and the idea of human supremacy over nature, and by an influx of foreign immigrants, who challenged the supremacy of the old Anglo-Saxon elite. In response, many people drew comfort from the theories of philosopher Herbert Spencer, who held that human society inevitably develops towards higher and more spiritual forms. In this illuminating study, Kathleen Pyne explores how Spencer’s theories influenced a generation of American artists. She shows how the painters of the 1880s and 1890s, particularly John La Farge, James McNeill Whistler, Thomas Dewing and the Boston school, and the impressionist painters of the Ten, developed an art dedicated to social refinement and spiritual ideals and to defending the Anglo-Saxon elite of which they were members. This linking of visual culture to the problematic conditions of American life radically reinterprets the most important trends in late nineteenth-century American painting.
AUTHOR BIOGRAPHY
Kathleen Pyne is Professor of Art at the University of Notre Dame.
TABLE OF CONTENTS


AcknowledgmentsIntroductionOne. The American Response to DarwinismTwo. John La Farge and the Sensuous EnvironmentThree. James McNeill Whistler and the Religion of ArtFour. Aesthetic Strategies in the “Age of Pain”: Thomas Dewing and the Art of LifeFive. The Ideologies of American ImpressionismConclusionNotesSelect BibliographyIndex