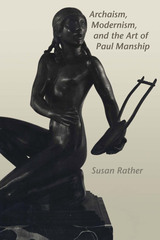 Archaism, an international artistic phenomenon from early in the twentieth century through the 1930s, receives its first sustained analysis in this book. The distinctive formal and technical conventions of archaic art, especially Greek art, particularly affected sculptors—some frankly modernist, others staunchly conservative, and a few who, like American Paul Manship, negotiated the distance between tradition and modernity. Susan Rather considers the theory, practice, and criticism of early twentieth-century sculpture in order to reveal the changing meaning and significance of the archaic in the modern world. To this end—and against the background of Manship’s career—she explores such topics as the archaeological resources for archaism, the classification of the non-Western art of India as archaic, the interest of sculptors in modem dance (Isadora Duncan and Ruth St. Denis), and the changing critical perception of archaism.

Rather rejects the prevailing conception of archaism as a sterile and superficial academic style to argue its initial importance as a modernist mode of expression. The early practitioners of archaism—including Aristide Maillol, André Derain, and Constantin Brancusi—renounced the rhetorical excess, overrefined naturalism, and indirect techniques of late nineteenth-century sculpture in favor of nonnarrative, stylized and directly carved works, for which archaic Greek art offered an important example. Their position found implicit support in the contemporaneous theoretical writings of Emmanuel Löwy, Wilhelm Worringer, and Adolf von Hildebrand.

The perceived relationship between archaic art and tradition ultimately compromised the modernist authority of archaism and made possible its absorption by academic and reactionary forces during the 1910s. By the 1920s, Paul Manship was identified with archaism, which had become an important element in the aesthetic of public sculpture of both democratic and totalitarian societies. Sculptors often employed archaizing stylizations as ends in themselves and with the intent of evoking the foundations of a classical art diminished in potency by its ubiquity and obsolescence. Such stylistic archaism was not an empty formal exercise but an urgent affirmation of traditional values under siege. Concurrently, archaism entered the mainstream of fashionable modernity as an ingredient in the popular and commercial style known as Art Deco. Both developments fueled the condemnation of archaism—and of Manship, its most visible exemplar—by the avant-garde. Rather’s exploration of the critical debate over archaism, finally, illuminates the uncertain relationship to modernism on the part of many critics and highlights the problematic positions of sculpture in the modernist discourse.

AUTHOR BIOGRAPHY
Susan Rather is Associate Professor of Art History at the University of Texas at Austin.
TABLE OF CONTENTS