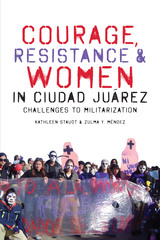 Ciudad Juárez has recently become infamous for its murder rate, which topped 3,000 in 2010 as competing drug cartels grew increasingly violent and the military responded with violence as well. Despite the atmosphere of intimidation by troops, police, and organized criminals, women have led the way in civil society activism, spurring the Juárez Resistance and forging powerful alliances with anti-militarization activists.

An in-depth examination of la Resistencia Juarense, Courage, Resistance, and Women in Ciudad Juárez draws on ethnographic research to analyze the resistance’s focus on violence against women, as well as its clash with the war against drugs championed by Mexican President Felipe Calderón with the support of the United States. Through grounded insights, the authors trace the transformation of hidden discourses into public discourses that openly challenge the militarized border regimes. The authors also explore the advocacy carried on by social media, faith-based organizations, and peace-and-justice activist Javier Sicilia while Calderón faced U.S. political schisms over the role of border trade in this global manufacturing site.

Bringing to light on-the-ground strategies as well as current theories from the fields of sociology, political anthropology, and human rights, this illuminating study is particularly significant because of its emphasis on the role of women in local and transnational attempts to extinguish a hot zone. As they overcome intimidation to become game-changing activists, the figures featured in Courage, Resistance, and Women in Ciudad Juárez offer the possibility of peace and justice in the wake of seemingly irreconcilable conflict.

AUTHOR BIOGRAPHY
Kathleen Staudt is Professor of Political Science and Endowed Professor of Western Hemispheric Trade Policy Studies at the University of Texas at El Paso. She is the author of eighteen previous books, including nine that focus on the U.S.-Mexican borderlands.Zulma Y. Méndez is a professor and researcher at El Colegio de Chihuahua in Ciudad Juárez. She also codirects the National Endowment for the Humanities project on Border Security and the Humanities at the Center for Inter-American and Border Studies at the University of Texas at El Paso.
REVIEWS
"An exciting effort to document and relate much-overlooked human agency by ordinary and extraordinary residents of the Ciudad Juárez and El Paso region in challenging glaring inadequacies and injustices. . . . Staudt and Méndez have achieved something quite remarkable. There is no other book like this in the field of border studies or the studies of violence and the ongoing crisis in Mexico. Highly readable, it is relevant to a wide range of readers."
— Timothy Dunn, Professor of Sociology, Salisbury University

"The authors’ feminist and activist ‘positionality’ adds to the energy and passion underlying the narrative and draws in readers who have been so inundated by media sensationalism about the problems in Juárez that they are hungry for alternative portrayals of hopeful documents."
— Susan Tiano, Director, Latin American & Iberian Institute, University of New Mexico

Chapter 3. From Fear and Intimidation to Game-Changing Activism

Chapter 4. "Fed Up" with Militarization and Murders, via Social Media

Chapter 6. South-to-North Solidarity: Sicilia and Peace and Justice Movements at the Border

Chapter 7. Conclusion: Reflections on the Possibilities of Post-Conflict Peace and Justice