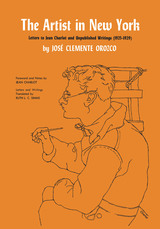 BUY FROM
The Artist in New York: Letters to Jean Charlot and unpublished writings, 1925-1929.
by José Clemente Orozco
translated by Ruth L.C. Simms
University of Texas Press, 1974
eISBN: 978-0-292-76718-8
Paper: 978-0-292-76058-5
In his Foreword to this edition, Jean Charlot says: "An unusual feature of Orozco's letters is the great deal that he has to say about art. That one artist writing to another would emphasize art as his subject seems normal enough to the American reader. Yet, within the context of the Mexico of those days, the fact remains exceptional. The patria Orozco was leaving behind had, even from the point of view of its artists, many cares more pressing than art." The letters and unpublished writings of Orozco from this period (1925-1929) describe an important period of transition in the artist's life, from his departure from Mexico, almost as a defeated man, to the period just before he received the great mural commissions—Pomona, The New School for Social Research in New York, Dartmouth—that were to bring him lasting international fame.
TABLE OF CONTENTS