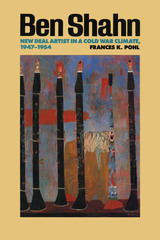 In the first, most intense years of the Cold War (1947–1954), New Deal liberals often found themselves in great disfavor. Ben Shahn's experience presents something of a paradox, however, since his paintings appealed in different ways to both liberals and conservatives. Blacklisted by CBS during the McCarthy era and yet, ironically, incorporated into presidential "campaigns of truth" aimed at improving the U.S. image abroad, Ben Shahn is a pivotal figure, revealing the complexities and contradictions inherent in this highly polarized moment in American history.

In this pathbreaking study, Frances Pohl traces the political and artistic struggles Ben Shahn became embroiled in as he tried to remain a socially concerned artist during the early Cold War period. She shows how he rejected the argument, voiced by many Abstract Expressionists, that art and politics should not mix, yet at the same time searched for a way to depict, in universal and allegorical terms, the broad human condition rather than simply specific instances of injustice. Perhaps most important, she makes critical connections between U.S. social and political history and the art it provoked, thus illuminating both the later career of Ben Shahn and the Cold War era in American cultural history.