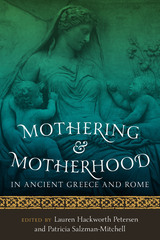 Motherhood played a central role in ancient Greece and Rome, despite the virtual absence of female participation in the public spheres of life. Mothers could wield enormous influence as the reproductive bodies of society and, in many cases, of culture. Yet motherhood and acts of mothering have received relatively little focused and sustained attention by modern scholars, who have concentrated almost exclusively on analyzing depictions of ancient women more generally.

In this volume, experts from across the humanities present a wealth of evidence from legal, literary, and medical texts, as well as art, architecture, ritual, and material culture, to reveal the multilayered dimensions of motherhood in both Greece and Rome and to confront the fact that not all mothers and acts of mothering can be easily categorized. The authors consider a variety of mothers—from the mythical to the real, from empress to prostitute, and from citizen to foreigner—to expose both the mundane and the ideologically charged lives of mothers in the Classical world. Some essays focus on motherhood as a largely private (emotional, intimate) experience, while others explore the ramifications of public, oftentimes politicized, displays of motherhood. This state-of-the art look at mothers and mothering in the ancient world also takes on a contemporary relevance as the authors join current debates on motherhood and suggest links between the lives of ancient mothers and the diverse, often conflicting roles of women in modern Western society.

Lauren Hackworth Petersen is Associate Professor of Art History at the University of Delaware, where she specializes in Roman art and archaeology.

Patricia Salzman-Mitchell is Associate Professor in the Department of Classics and General Humanities at Montclair State University. She specializes in Latin poetry, gender studies in Classical literature, film and the Classics, and the Classical tradition.

REVIEWS
A recent collection of essays on motherhood and mothering in antiquity, Mothering and Motherhood in Ancient Greece and Rome, reminds us that questions about what it means to be a mother were also present in ancient Greek and Roman societies, despite some significant differences.
— Times Literary Supplement