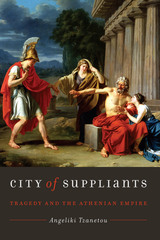 After fending off Persia in the fifth century BCE, Athens assumed a leadership position in the Aegean world. Initially it led the Delian League, a military alliance against the Persians, but eventually the league evolved into an empire with Athens in control and exacting tribute from its former allies. Athenians justified this subjection of their allies by emphasizing their fairness and benevolence towards them, which gave Athens the moral right to lead. But Athenians also believed that the strong rule over the weak and that dominating others allowed them to maintain their own freedom. These conflicting views about Athens’ imperial rule found expression in the theater, and this book probes how the three major playwrights dramatized Athenian imperial ideology.

Through close readings of Aeschylus’ Eumenides, Euripides’ Children of Heracles, and Sophocles’ Oedipus at Colonus, as well as other suppliant dramas, Angeliki Tzanetou argues that Athenian tragedy performed an important ideological function by representing Athens as a benevolent and moral ruler that treated foreign suppliants compassionately. She shows how memorable and disenfranchised figures of tragedy, such as Orestes and Oedipus, or the homeless and tyrant-pursued children of Heracles were generously incorporated into the public body of Athens, thus reinforcing Athenians’ sense of their civic magnanimity. This fresh reading of the Athenian suppliant plays deepens our understanding of how Athenians understood their political hegemony and reveals how core Athenian values such as justice, freedom, piety, and respect for the laws intersected with imperial ideology.

Angeliki Tzanetou is Associate Professor of Classics at the University of Illinois at Urbana-Champaign. She is coeditor with Maryline Parca of Finding Persephone: Women’s Rituals in the Ancient Mediterranean and has published articles on ritual and gender in drama and on tragedy and politics.

Tzanetou offers a very useful addition to the ever-increasing scholarship on the relationship between tragedy and the Athenian empire, and it deserves a wide audience…