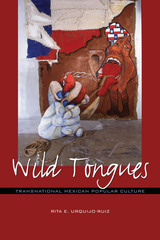 Tracing the configuration of the slapstick, destitute Peladita/Peladito and the Pachuca/Pachuco (depicted in flashy zoot suits) from 1928 to 2004, Wild Tongues is an ambitious, extensive examination of social order in Mexican and Chicana/o cultural productions in literature, theater, film, music, and performance art.

From the use of the Peladita and the Peladito as stock characters who criticized various aspects of the Mexican government in the 1920s and 1930s to contemporary performance art by María Elena Gaitán and Dan Guerrero, which yields a feminist and queer-studies interpretation, Rita Urquijo-Ruiz emphasizes the transnational capitalism at play in these comic voices. Her study encompasses both sides of the border, including the use of the Pachuca and the Pachuco as anti-establishment, marginal figures in the United States. The result is a historically grounded, interdisciplinary approach that reimagines the limitations of nation-centered thinking and reading.