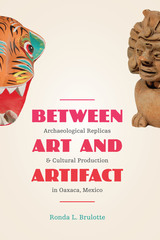 Oaxaca is internationally renowned for its marketplaces and archaeological sites where tourists can buy inexpensive folk art, including replicas of archaeological treasures. Archaeologists, art historians, and museum professionals sometimes discredit this trade in “fakes” that occasionally make their way to the auction block as antiquities. Others argue that these souvenirs represent a long cultural tradition of woodcarving or clay sculpting and are “genuine” artifacts of artisanal practices that have been passed from generation to generation, allowing community members to preserve their cultural practices and make a living. Exploring the intriguing question of authenticity and its relationship to cultural forms in Oaxaca and throughout southern Mexico, Between Art and Artifact confronts an important issue that has implications well beyond the commercial realm.

Demonstrating that identity politics lies at the heart of the controversy, Ronda Brulotte provides a nuanced inquiry into what it means to present “authentic” cultural production in a state where indigenous ethnicity is part of an awkward social and racial classification system. Emphasizing the world-famous woodcarvers of Arrazola and the replica purveyors who come from the same community, Brulotte presents the ironies of an ideology that extols regional identity but shuns its artifacts as “forgeries.” Her work makes us question the authority of archaeological discourse in the face of local communities who may often see things differently. A departure from the dialogue that seeks to prove or disprove “authenticity,” Between Art and Artifact reveals itself as a commentary on the arguments themselves, and what the controversy can teach us about our shifting definitions of authority and authorship.

Ronda L. Brulotte is Assistant Professor of Anthropology and faculty affiliate with the Latin American and Iberian Institute at the University of New Mexico.