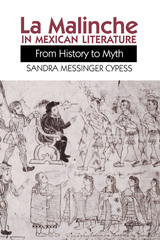 Of all the historical characters known from the time of the Spanish conquest of the New World, none has proved more pervasive or controversial than that of the Indian interpreter, guide, mistress, and confidante of Hernán Cortés, Doña Marina—La Malinche—Malintzin. The mother of Cortés's son, she becomes not only the mother of the mestizo but also the Mexican Eve, the symbol of national betrayal.

Very little documented evidence is available about Doña Marina. This is the first serious study tracing La Malinche in texts from the conquest period to the present day. It is also the first study to delineate the transformation of this historical figure into a literary sign with multiple manifestations.

Cypess includes such seldom analyzed texts as Ireneo Paz's Amor y suplicio and Doña Marina, as well as new readings of well-known texts like Octavio Paz's El laberinto de la soledad. Using a feminist perspective, she convincingly demonstrates how the literary depiction and presentation of La Malinche is tied to the political agenda of the moment. She also shows how the symbol of La Malinche has changed over time through the impact of sociopolitical events on the literary expression.

AUTHOR BIOGRAPHY
Sandra Messinger Cypess is a professor of Latin American literature at the University of Maryland, College Park.
TABLE OF CONTENTS