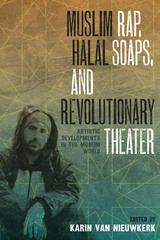 The contributors to this volume investigate the historical and structural conditions that impede or facilitate the emergence of a "post-Islamist" cultural sphere. They discuss the development of religious sensibilities among audiences, which increasingly include the well-to-do and the educated young, as well as the emergence of a local and global religious market. At the heart of these essays is an examination of the intersection between cultural politics, performing art, and religion, addressing such questions as where, how, and why pop culture and performing arts have been turned into a religious mission, and whether it is possible to develop a new Islamic aesthetic that is balanced with religious sensibilities. As we read about young Muslims and their quest for a "cool Islam" in music, their struggle to quell their stigmatized status, or the collision of morals and the marketplace in the arts, a vivid, varied new perspective on Muslim culture emerges.

Karin van Nieuwkerk is an anthropologist and Associate Professor at the University of Nijmegen. Her books include Women Embracing Islam: Gender and Conversion in the West and "A Trade like Any Other": Female Singers and Dancers in Egypt.