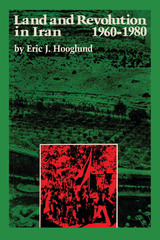 BUY FROM
Land and Revolution in Iran, 1960–1980
by Eric J. Hooglund
University of Texas Press, 1982
eISBN: 978-1-4773-0012-1
Paper: 978-0-292-74483-7
Carried out by the government of the shah between 1962 and 1971, the Iranian land reform was one of the most ambitious such undertakings in modern Middle Eastern history. Yet, beneath apparent statistical success, the actual accomplishments of the program, in terms of positive benefits for the peasantry, were negligible. Later, the resulting widespread discontent of thousands of Iranian villagers would contribute to the shah's downfall. In the first major study of the effects of this widely publicized program, Eric Hooglund's analysis demonstrates that the primary motives behind the land reform were political. Attempting to supplant the near-absolute authority of the landlord class over the countryside, the central government hoped to extend its own authority throughout rural Iran. While the Pahlavi government accomplished this goal, its failure to implement effective structural reform proved to be a long-term liability. Hooglund, who conducted field research in rural Iran throughout the 1970s and who witnessed the unfolding of the revolution from a small village, provides a careful description of the development of the land reform and of its effects on the main groups involved: landlords, peasants, local officials, merchants, and brokers. He shows how the continuing poverty in the countryside forced the migration of thousands of peasants to the cities, resulting in serious shortages of agricultural workers and an oversupply of unskilled urban labor. When the shah's government was faced with mass opposition in the cities in 1978, not only did a disillusioned rural population fail to support the regime, but thousands of villagers participated in the protests that hastened the collapse of the monarchy.
TABLE OF CONTENTS