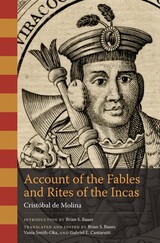 Only a few decades after the Spanish conquest of Peru, the third Bishop of Cuzco, Sebastián de Lartaún, called for a report on the religious practices of the Incas. The report was prepared by Cristóbal de Molina, a priest of the Hospital for the Natives of Our Lady of Succor in Cuzco and Preacher General of the city. Molina was an outstanding Quechua speaker, and his advanced language skills allowed him to interview the older indigenous men of Cuzco who were among the last surviving eyewitnesses of the rituals conducted at the height of Inca rule. Thus, Molina's account preserves a crucial first-hand record of Inca religious beliefs and practices.

This volume is the first English translation of Molina's Relación de las fábulas y ritos de los incas since 1873 and includes the first authoritative scholarly commentary and notes. The work opens with several Inca creation myths and descriptions of the major gods and shrines (huacas). Molina then discusses the most important rituals that occurred in Cuzco during each month of the year, as well as rituals that were not tied to the ceremonial calendar, such as birth rituals, female initiation rites, and marriages. Molina also describes the Capacocha ritual, in which all the shrines of the empire were offered sacrifices, as well as the Taqui Ongoy, a millennial movement that spread across the Andes during the late 1560s in response to growing Spanish domination and accelerated violence against the so-called idolatrous religions of the Andean peoples.

Brian S. Bauer is Professor of Anthropology at the University of Illinois at Chicago.

Vania Smith-Oka is Nancy O'Neill Assistant Professor of Anthropology, as well as a Faculty Fellow at the Kellogg Institute for International Studies, at the University of Notre Dame.

Gabriel E. Cantarutti is a PhD candidate in anthropology at the University of Illinois at Chicago.

Account of the Fables and Rites of the Incas

Chapter 1: Introduction
Chapter 2: Origin Myths
Chapter 3: Of Quipus and Inca Yupanqui
Chapter 4: The Sorcerers
Chapter 5: The Rituals of the Months of the Year
Chapter 6: The Ayuscay, Rutuchico, and Quicochico Rituals
Chapter 7: The Capacocha
Chapter 8: Taqui Onqoy