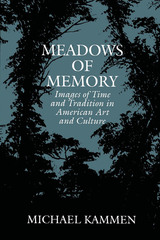 "History painting," for many people, conjures up Washington Crossing the Delaware and other paintings of heroic historical events. But history has made its way into considerably more American art than such obvious examples, in the view of Michael Kammen. In three thought-provoking and innovative essays, Kammen ranges from the Renaissance to the twentieth century, from central Europe to the western United States, and from elegant oil painting to folk sculpture to show the transformations of Old World icons of time into New World images of social memory and tradition.

In the first essay, Kammen demonstrates how American artists and artisans modified European emblems of time in response to their New World setting. In the second essay concerning nineteenth-century landscape art, he explores how artists used space to represent the movement of American culture through time. In the final essay, he looks at two distinctively American motifs of collective memory and tradition—old houses and elm trees. Throughout this interdisciplinary study, Kammen draws his examples from well-known and lesser-known artists, as well as from diverse American writers. Over 100 black-and-white illustrations accompany the text.

Of interest to all students of American culture, Meadows of Memory raises intriguing questions about the American paradox of desiring to conquer mutability while yearning for emblems of a (perhaps imagined?) past.