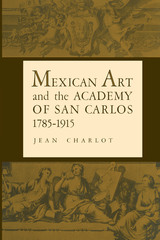 BUY FROM
Mexican Art and the Academy of San Carlos, 1785-1915
by Jean Charlot
introduction by Elizabeth Wilder Weismann
University of Texas Press, 1962
eISBN: 978-0-292-77151-2
Paper: 978-0-292-74231-4
Was the Royal Academy of San Carlos, founded in 1785 by the King of Spain, beneficial or detrimental to the development of a valid, living art in Mexico? The answer lies in the archives of the school, but nobody thought about constructing an aesthetic history from them until Jean Charlot accidentally discovered their extent and interest while searching for other material. In this straightforward, documented account he presents not merely opinions and criticism but evidence, including curricula and contemporary drawings by students and teachers. Since Pre-Conquest art there have been, it is usually assumed, two periods in Mexican art: the Colonial and the Modern. Between these peaks lies the dark Academy-dominated hiatus called Neo-Classicism, an episode that this treatise makes the first attempt to understand. The academic canons imported from Europe during this period were undeniably wrong for the indigenous people, and especially wrong at a time when a revolutionary Mexico was struggling for its own identity. But instead of throwing out this strange episode as foreign and imitative, it now becomes possible to see it as a period of acculturation through which the Mexican spirit emerged. Aside from its interest as aesthetic history, this book makes an important contribution to the social history of Mexico. Some provocative ideas emerge: the interrelations between cultural and political attitudes, the historical impact of events and personalities on ideology. In the seesaw of political and financial fortunes, the worst moments of confusion were often the most pregnant artistically, with mexicanidad rising inevitably when official guidance weakened. As social history this account constitutes an interesting parallel to similar cultural experiences in the United States and in other countries of the Americas. Charlot presents this material without special pleading, but not without appraisal. He writes: “. . . in the periods when the Academy was most strictly run along academic lines, it helped the young, by contrast, to realize the meaning of freedom. When the school was manned by men blind to the Mexican tradition, and sensitive only to European values, their stubborn stand became a most healthy invitation to artistic revolution.”
AUTHOR BIOGRAPHY
Jean Charlot (1898–1979) was a French painter and illustrator, active in Mexico and the U.S.
TABLE OF CONTENTS