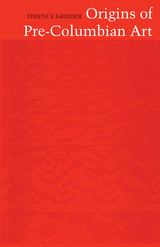 BUY
Origins of Pre-Columbian Art
by Terence Grieder
University of Texas Press, 1982
Paper: 978-0-292-74105-8
Since Columbus first called the natives of the Americas “Indians,” the sources of their art and culture have been a puzzle. The strange mixture of objects of Asian appearance with those decidedly un-Asian has provided fuel for controversy between those who see the American cultures as products of diffusion and those who see them as independent inventions. Origins of Pre-Columbian Art cuts through this old dispute to provide a fresh look at ancient cultural history in the Americas and the Pacific basin. Using evidence from archaeology, ethnology, and psychology, Terence Grieder suggests that contact between individuals across cultural borders is the root of both invention and diffusion. By tracing the spread of early symbolic techniques, materials, and designs from Europe and Asia to the lands of the Pacific and to the Americas, he displays the threads woven through humanity’s common cultural heritage. While archaeology provides examples of ancient symbols, ethnology reveals widely separated modern peoples still using these symbols and giving them similar meanings. Mapping these patterns of use and meaning, the author describes three waves of migration from Asia to the Americas, each carrying its own cluster of ideas and the symbols that expressed them. First Wave cultures focused on their environment and on the human body, inventing symbols that compared people and nature. Second Wave symbolism emphasized the center and the periphery: the village and the horizon; the tree or pole as world axis; and the world’s rim, where spirits exist. These cultures created masks to give form to those beings beyond the horizon. The heavens were finally incorporated into the system of symbols by Third Wave peoples, who named the celestial bodies as gods, treasured heaven-colored stones, and represented the world in pyramids. Emphasizing the interpretation of art in its many forms, Grieder has found that such seemingly minor decorations as bark cloth clothing and tattoos have deep meaning. Ancient art, he argues, was the vehicle for ancient science, serving to express insights into biology, astronomy, and the natural world.
AUTHOR BIOGRAPHY
Terence Grieder is Professor Emeritus of the History of Art at the University of Texas at Austin.