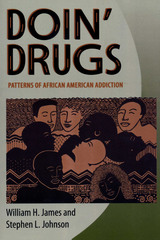 Throughout the African American community, individuals and organizations ranging from churches to schools to drug treatment centers are fighting the widespread use of crack cocaine. To put that fight in a larger cultural context, Doin' Drugs explores historical patterns of alcohol and drug use from pre-slavery Africa to present-day urban America.

William Henry James and Stephen Lloyd Johnson document the role of alcohol and other drugs in traditional African cultures, among African slaves before the American Civil War, and in contemporary African American society, which has experienced the epidemics of marijuana, heroin, crack cocaine, and gangs since the beginning of this century. The authors zero in on the interplay of addiction and race to uncover the social and psychological factors that underlie addiction.

James and Johnson also highlight many culturally informed programs, particularly those sponsored by African American churches, that are successfully breaking the patterns of addiction. The authors hope that the information in this book will be used to train a new generation of counselors, ministers, social workers, nurses, and physicians to be better prepared to face the epidemic of drug addiction in African American communities.

William H. James is Research Associate Professor at the University of Washington and a consultant and trainer in cross-cultural counseling and substance abuse. Stephen L. Johnson is Associate Minister at Mt. Zion Baptist Church and Director of the Cocaine Outreach and Recovery Program in Seattle, Washington. He and Dr. James are co-editors of the Journal of Urban Addiction.