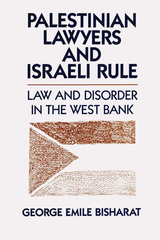 The study revolves around the central question of why the Palestinian legal profession declined during twenty years of Israeli occupation when, in other Third World countries, the legal profession has often reached its peak during a period of Western colonization. Bisharat answers this question with a wide-ranging inquiry into the historical origins of the legal profession and court system in Palestine, the tenuous grounding of these institutions in Palestinian society and culture, and the structure, style, and policies of the late-twentieth-century Israeli military government in the West Bank.

For general readers interested in the Palestinian-Israeli conflict, as well as specialists in such fields as legal anthropology, sociology of the professions, Third World law and development, and Middle Eastern studies, Palestinian Lawyers and Israeli Rule will be required reading.

AUTHOR BIOGRAPHY
George Emile Bisharat is Professor of Law at the University of California Hastings College of the Law.
TABLE OF CONTENTS