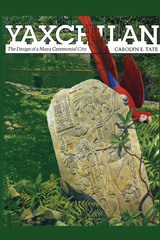 As archaeologists peel away the jungle covering that has both obscured and preserved the ancient Maya cities of Mexico and Central America, other scholars have only a limited time to study and understand the sites before the jungle, weather, and human encroachment efface them again, perhaps forever. This urgency underlies Yaxchilan: The Design of a Maya Ceremonial City, Carolyn Tate's comprehensive catalog and analysis of all the city's extant buildings and sculptures.

During a year of field work, Tate fully documented the appearance of the site as of 1987. For each sculpture and building, she records its discovery, present location, condition, measurements, and astronomical orientation and reconstructs its Long Counts and Julian dates from Calendar Rounds. Line drawings and photographs provide a visual document of the art and architecture of Yaxchilan.

More than mere documentation, however, the book explores the phenomenon of art within Maya society. Tate establishes a general framework of cultural practices, spiritual beliefs, and knowledge likely to have been shared by eighth-century Maya people. The process of making public art is considered in relation to other modes of aesthetic expression, such as oral tradition and ritual. This kind of analysis is new in Maya studies and offers fresh insight into the function of these magnificent cities and the powerful role public art and architecture play in establishing cultural norms, in education in a semiliterate society, and in developing the personal and community identities of individuals.

Several chapters cover the specifics of art and iconography at Yaxchilan as a basis for examining the creation of the city in the Late Classic period. Individual sculptures are attributed to the hands of single artists and workshops, thus aiding in dating several of the monuments. The significance of headdresses, backracks, and other costume elements seen on monuments is tied to specific rituals and fashions, and influence from other sites is traced. These analyses lead to a history of the design of the city under the reigns of Shield Jaguar (A.D. 681-741) and Bird Jaguar IV (A.D. 752-772).

In Tate's view, Yaxchilan and other Maya cities were designed as both a theater for ritual activities and a nexus of public art and social structures that were crucial in defining the self within Maya society.

Carolyn E. Tate is associate curator of pre-Columbian art at the Dallas Museum of Art.