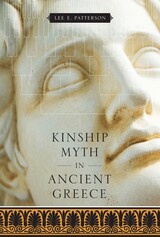 In ancient Greece, interstate relations, such as in the formation of alliances, calls for assistance, exchanges of citizenship, and territorial conquest, were often grounded in mythical kinship. In these cases, the common ancestor was most often a legendary figure from whom both communities claimed descent.

In this detailed study, Lee E. Patterson elevates the current state of research on kinship myth to a consideration of the role it plays in the construction of political and cultural identity. He draws examples both from the literary and epigraphical records and shows the fundamental difference between the two. He also expands his study into the question of Greek credulity—how much of these founding myths did they actually believe, and how much was just a useful fiction for diplomatic relations? Of central importance is the authority the Greeks gave to myth, whether to elaborate narratives or to a simple acknowledgment of an ancestor. Most Greeks could readily accept ties of interstate kinship even when local origin narratives could not be reconciled smoothly or when myths used to explain the link between communities were only "discovered" upon the actual occasion of diplomacy, because such claims had been given authority in the collective memory of the Greeks.