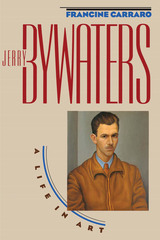 As an artist, art critic, museum director, and art educator, Jerry Bywaters reshaped the Texas art world and attracted national recognition for Texas artists. This first full-scale biography explores his life and work in the context of twentieth-century American art, revealing Bywaters' important role in the development of regionalist painting.

Francine Carraro delves into all aspects of Bywaters' career. As an artist, Bywaters became a central figure and spokesman for a group of young, energetic painters known as the Dallas Nine (Alexandre Hogue, Everett Spruce, Otis Dozier, William Lester, and others) who broke out of the limitations of provincialism and attained national recognition beginning in the 1930s.

As director of the Dallas Museum of Fine Arts, art critic for the Dallas Morning News, and professor of art and art history at Southern Methodist University, Bywaters became a champion of the arts in Texas. Carraro traces his strong supporting role in professionalizing art institutions in Texas and defendlng the right to display art considered "subversive" in the McCarthy era.

From these discussions emerges a finely drawn portrait of an artist who used a vocabulary of regional images to explore universal themes. It will be of interest to all students of American studies, national and regional art history, and twentieth-century biography.

AUTHOR BIOGRAPHY
Francine Carraro is Executive Director of the Grace Museum in Abilene, Texas. She has researched and written extensively on twentieth-century American and Southwestern art.
REVIEWS
. . . a pioneering study of a major figure whose many talents and sheer longevity kept him at the center of major developments in twentieth century art in Texas.  . . .This in-depth treatment of a Texas regionalist will disabuse the general public of the notion that 1930s regionalism is confined to Benton, Curry, and Wood.
— M. Sue Kendall, Ph.D., author of Rethinking, Regionalism: John Steuart Curry and the Kansas Mural Controversy

. . . an original scholarly contribution. . .  Not only has Cararro examined a large body of material, including art works, interviews, unpublished manuscript sources, and printed works by and about Bywaters, she has written a most readable and well-organized book on her subject.
— David Farmer, head, DeGolyer Library, Southern Methodist University