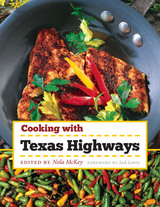 Whether you're hungry for down-home barbecue and Tex-Mex, or you want to try more exotic dishes such as Paella Valenciana and Thai Pesto, Texas Highways has long been a trusted source for delicious recipes that reflect wide-ranging Lone Star tastes. The state's official travel magazine published its first Texas Highways Cookbook, which has sold 20,000 copies, in 1986. Responding to the public's demand for a new collection of the magazine's recipes, the editors are pleased to bring you Cooking with Texas Highways, a compilation of more than 250 recipes that are as richly diverse and flavorful as Texas itself.

Cooking with Texas Highways samples all the major ethnic cuisines of the state with recipes from home cooks, well-known chefs, and popular restaurants. It offers a varied and intriguing selection of snacks and beverages, breads, soups and salads, main dishes, vegetables and sides, sauces and spreads, desserts, and more. A special feature of this cookbook is a chapter on Dutch-oven cooking, which covers all the basics for cooking outdoors with live coals, including seventeen mouth-watering recipes. In addition, you'll find dozens of the lovely color photographs that have long made Texas Highways such a feast for the eyes, along with tips on cooking techniques and sources for ingredients and stories about some of the folks who created the recipes. If you want to sample all the tastes of Texas, there's no better place to start than Cooking with Texas Highways.

Nola McKey has been an Associate Editor at Texas Highways since 1994. Previously she was an Assistant Foods Editor at Southern Living.

Jack Lowry has been the Editor of Texas Highways since 1992.

REVIEWS
Whether you like to experiment with new recipes or just take pleasure in reading cookbooks and looking at the mouth-watering photos, there’s plenty here to enjoy with more than 250 dishes covering a wide range of regional and ethnic flavors.
— Lubbock Avalanche-Journal