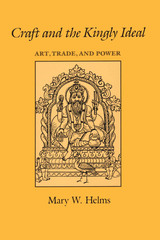 In ancient Mediterranean cultures, diamonds were thought to endow their owners with invincibility. In contemporary United States culture, a foreign-made luxury car is believed to give its owner status and prestige. Where do these beliefs come from?

In this study of craft production and long-distance trade in traditional, nonindustrial societies, Mary W. Helms explores the power attributed to objects that either are produced by skilled artisans and/or come from "afar." She argues that fine artisanship and long-distance trade, both of which are more available to powerful elites than to ordinary people, are means of creating or acquiring tangible objects that embody intangible powers and energies from the cosmological realms of gods, ancestors, or heroes. Through the objects, these qualities become available to human society and confer honor and power on their possessors.

Helms’ novel approach equates trade with artistry and emphasizes acquisition rather than distribution. She rejects the classic Western separation between economics and aesthetics and offers a new paradigm for understanding traditional societies that will be of interest to all anthropologists and archaeologists.

Mary W. Helms is Professor of Anthropology at the University of North Carolina at Greensboro.