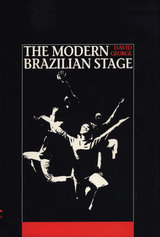 Reading a play and watching it performed onstage are quite different experiences. Likewise, studying a country's theatrical tradition with reference only to playtexts overlooks the vital impact of a play's performance on the audience and on the whole artistic community. In this performance-centered approach to Brazilian theatre since the 1940s, David George explores a total theatrical language—the plays, the companies that produced them, and the performances that set a standard for all future stagings.

George structures the discussion around several important companies. He begins with Os Comediantes, whose revolutionary 1943 staging of Nelson Rodrigues' Vestido de Noiva (Bridal Gown) broke with the outmoded comedy-of-manners formula that had dominated the national stage since the nineteenth century. He considers three companies of the 1950s and 1960s—Teatro Brasileiro de Comédia, Teatro de Arena, and Teatro Oficina—along with the 1967 production of O Rei da Vela (The Candle King) by Teatro Oficina.

The 1970s represented a wasteland for Brazilian theatre, George finds, in which a repressive military dictatorship muzzled artistic expression. The Grupo Macunaíma brought theatre alive again in the 1980s, with its productions of Macunaíma and Nelson 2 Rodrigues.

Common to all theatrical companies, George concludes, was the desire to establish a national aesthetic, free from European and United States models. The creative tension this generated and the successes of modern Brazilian theatre make lively reading for all students of Brazilian and world drama.

AUTHOR BIOGRAPHY
David George has extensive experience as a theatre director, actor, and designer in both Brazil and the United States. He is Professor of Spanish and Portuguese at Lake Forest College, Lake Forest, Illinois.
TABLE OF CONTENTS