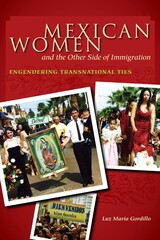 Weaving narratives with gendered analysis and historiography of Mexicans in the Midwest, Mexican Women and the Other Side of Immigration examines the unique transnational community created between San Ignacio Cerro Gordo, Jalisco, and Detroit, Michigan, in the last three decades of the twentieth century, asserting that both the community of origin and the receiving community are integral to an immigrant's everyday life, though the manifestations of this are rife with contradictions.

Exploring the challenges faced by this population since the inception of the Bracero Program in 1942 in constantly re-creating, adapting, accommodating, shaping, and creating new meanings of their environments, Luz María Gordillo emphasizes the gender-specific aspects of these situations. While other studies of Mexican transnational identity focus on social institutions, Gordillo's work introduces the concept of transnational sexualities, particularly the social construction of working-class sexuality. Her findings indicate that many female San Ignacians shattered stereotypes, transgressing traditionally male roles while their husbands lived abroad. When the women themselves immigrated as well, these transgressions facilitated their adaptation in Detroit. Placed within the larger context of globalization, Mexican Women and the Other Side of Immigration is a timely excavation of oral histories, archival documents, and the remnants of three decades of memory.