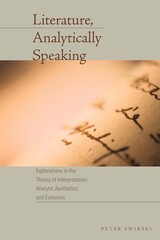 Dismissing critical inquirers who deny intention its key role in the study of literary reception, Swirski extends the defense of intentionality to art and to human behavior in general. In the process, Swirski takes stock of the recent work in evolutionary theory, arguing that the analysis of narrative truth may be grounded in the neo-Darwinian paradigm which forms the empirical backbone behind his analytic approach. Literature, Analytically Speaking provides a series of precepts designed to capture the ways in which we do interpret (and ought to interpret) works of literature. Reflecting a resounding shift from the poststructuralist paradigm, Swirski's lively and colorful presentation, backed up by a dazzling variety of examples and case studies, reconceptualizes the aesthetics of literature and literary studies.