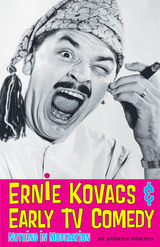 Among the pioneers of television, Ernie Kovacs was one of the most original and imaginative comedians. His zany, irreverent, and surprising humor not only entertained audiences throughout the 1950s and early 1960s, but also inspired a host of later comedies and comedians, including Monty Python, David Letterman, much of Saturday Night Live, Rowan and Martin's Laugh-In, Captain Kangaroo, and even Sesame Street. Kovacs created laughter through wildly creative comic jokes, playful characterizations, hilarious insights, and wacky experiments. "Nothing in moderation," his motto and epitaph, sums up well Kovacs's wholehearted approach to comedy and life.

In this book, Andrew Horton offers the first sustained look at Ernie Kovacs's wide-ranging and lasting contributions to the development of TV comedy. He discusses in detail Kovacs's work in New York, which included The Ernie Kovacs Show (CBS prime time 1952–1953), The Ernie Kovacs Show (NBC daytime variety 1956–1957), Tonight (NBC late-night comedy/variety 1956-1957), and a number of quiz shows. Horton also looks at Kovacs's work in Los Angeles and in feature film comedy. He vividly describes how Kovacs and his comic co-conspirators created offbeat characters and zany situations that subverted expectations and upended the status quo. Most of all, Horton demonstrates that Kovacs grasped the possibility for creating a fresh genre of comedy through the new medium of television and exploited it to the fullest.

Andrew Horton is the Jeanne H. Smith Professor of Film and Video Studies at the University of Oklahoma, an award-winning screenwriter, and the author of twenty books on film, screenwriting, and cultural studies.