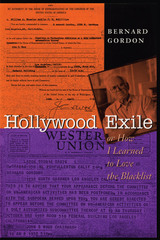 The Hollywood blacklist, which began in the late 1940s and ran well into the 1960s, ended or curtailed the careers of hundreds of people accused of having ties to the Communist Party. Bernard Gordon was one of them. In this highly readable memoir, he tells a engrossing insider's story of what it was like to be blacklisted and how he and others continued to work uncredited behind the scenes, writing and producing many box office hits of the era.

Gordon describes how the blacklist cut short his screenwriting career in Hollywood and forced him to work in Europe. Ironically, though, his is a success story that includes the films El Cid, 55 Days at Peking, The Thin Red Line, Krakatoa East of Java, Day of the Triffids, Earth vs. the Flying Saucers, Horror Express, and many others. He recounts the making of many movies for which he was the writer and/or producer, with wonderful anecdotes about stars such as Charlton Heston, David Niven, Sophia Loren, Ava Gardner, and James Mason; directors Nicholas Ray, Frank Capra, and Anthony Mann; and the producer-studio head team of Philip Yordan and Samuel Bronston.

AUTHOR BIOGRAPHY
In 1997, the Writers Guild of America began publicly re-crediting screenplays to their blacklisted authors. Bernard Gordon’s name has appeared more often than any other. Now retired after a thirty-year career, he lives in Los Angeles.
REVIEWS
Gordon's story is one of triumphing over adversity, as he managed to make a decent living and live a rather exotic life peopled with colourful characters, while maintaining his moral integrity. It's an inspiring, fascinating read.
— Reel Ink