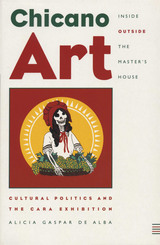 In the early 1990s, a major exhibition Chicano Art: Resistance and Affirmation, 1965-1985 toured major museums around the United States. As a first attempt to define and represent Chicano/a art for a national audience, the exhibit attracted both praise and controversy, while raising fundamental questions about the nature of multiculturalism in the U.S.

This book presents the first interdisciplinary cultural study of the CARA exhibit. Alicia Gaspar de Alba looks at the exhibit as a cultural text in which the Chicano/a community affirmed itself not as a "subculture" within the U.S. but as an "alter-Native" culture in opposition to the exclusionary and homogenizing practices of mainstream institutions. She also shows how the exhibit reflected the cultural and sexual politics of the Chicano Movement and how it serves as a model of Chicano/a popular culture more generally.

Drawing insights from cultural studies, feminist theory, anthropology, and semiotics, this book constitutes a wide-ranging analysis of Chicano/a art, popular culture, and mainstream cultural politics. It will appeal to a diverse audience in all of these fields.

AUTHOR BIOGRAPHY
Alicia Gaspar de Alba is Professor at the César E. Chávez Center for Chicana and Chicano Studies at UCLA.
REVIEWS
Alicia Gaspar de Alba has written an incisive, provocative, thoughtful, and opinionated book.... I have no doubt that it will become a central text in the fields of Chicano/a studies, feminist studies, ethnic studies, and cultural theory.
— Bryan J. Wolf, Professor of American Studies and English, Yale University