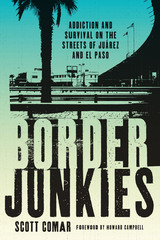 The drug war that has turned Juárez, Mexico, into a killing field that has claimed more than 7,000 lives since 2008 captures headlines almost daily. But few accounts go all the way down to the streets to investigate the lives of individual drug users. One of those users, Scott Comar, survived years of heroin addiction and failed attempts at detox and finally cleaned up in 2003. Now a graduate student at the University of Texas at El Paso in the history department's borderlands doctoral program, Comar has written Border Junkies, a searingly honest account of his spiraling descent into heroin addiction, surrender, change, and recovery on the U.S.-Mexico border.

Border Junkies is the first book ever written about the lifestyle of active addiction on the streets of Juárez. Comar vividly describes living between the disparate Mexican and American cultures and among the fellow junkies, drug dealers, hookers, coyote smugglers, thieves, and killers who were his friends and neighbors in addiction—and the social workers, missionaries, shelter workers, and doctors who tried to help him escape. With the perspective of his anthropological training, he shows how homelessness, poverty, and addiction all fuel the use of narcotics and the rise in their consumption on the streets of Juárez and contribute to the societal decay of this Mexican urban landscape. Comar also offers significant insights into the U.S.-Mexico borderland's underground and peripheral economy and the ways in which the region's inhabitants adapt to the local economic terrain.

Scott Comar has held a variety of jobs, including construction laborer, furniture mover, and long distance truck driver. After recovering from addiction, he earned bachelor's and master's degrees from the University of Texas at El Paso, where he is currently pursuing a Ph.D. in borderlands history.