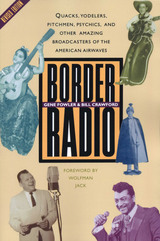 Before the Internet brought the world together, there was border radio. These mega-watt "border blaster" stations, set up just across the Mexican border to evade U.S. regulations, beamed programming across the United States and as far away as South America, Japan, and Western Europe.

This book traces the eventful history of border radio from its founding in the 1930s by "goat-gland doctor" J. R. Brinkley to the glory days of Wolfman Jack in the 1960s. Along the way, it shows how border broadcasters pioneered direct sales advertising, helped prove the power of electronic media as a political tool, aided in spreading the popularity of country music, rhythm and blues, and rock, and laid the foundations for today's electronic church. The authors have revised the text to include even more first-hand information and a larger selection of photographs.

AUTHOR BIOGRAPHY
Gene Fowler and Bill Crawford are freelance writers in Austin, Texas.
REVIEWS
This book adds immeasurably to our appreciation and understanding of the power the aural medium possesses to mirror and shape culture.
— Communication Booknotes Quarterly