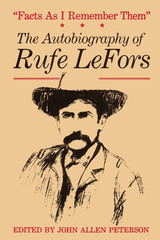 The rivers of the Texas Panhandle, the Canadian, and the forks of the Red break through the Cap Rock at the eastern edge of the Staked Plains. It’s rough, bleak country, with few trees and a great expanse of sky. Storms that form on the Great Plains and in the Rocky Mountains sweep through with nothing much to slow them down. And the small dusty towns that serve this vast ranchland cling to the waterways as they have for over a hundred years, since their early settlement. Their names aren’t well known now, but they were once focal points in a rugged country where buffalo hunters, trail drivers, outlaws, and ordinary folks alike passed through.

Rufe LeFors was one such "ordinary" man. With his father and older brothers, he was among the first to settle this country, drawn to West Texas by tales of open land and good grass. His life story, set down near the end of his long and adventurous life, is the best sort of insider's history, the chronicle of a life lived fully amid the exciting events and rough landscape of the frontier's final years.

Rufe LeFors recorded his story over the course of a decade, finishing up in 1941 in his eighty-first year. His memoirs span the period from the War between the States to the early twentieth century, when the Panhandle was still scarcely settled, a true frontier. In his time LeFors was trail driver, pony express rider, and rancher. He traveled for a year with Arrington's Texas Rangers, and he wore the badge of deputy sheriff in the wild west town of Old Mobeetie. He rode a fast horse after claims in the Cherokee Strip, spent time as a horse trader, and finally settled in Lawton, Oklahoma, where, after some twenty years as a deputy, he was elected to the office of sheriff.

LeFors knew how to tell a story. Whether it is an account of an outlaw's capture or the rescue of a white girl from prairie fire by a Comanche brave, he weaves into his narrative all the color, drama, and character of the event. His version of the death of Billy the Kid adds another perspective to that much celebrated episode in western history. His encounters with Temple Houston, the governor's flamboyant son, rancher Charles Goodnight, and Ranger Captain Arrington add to our fund of knowledge about those legendary frontier figures. LeFors wanted to get the facts—as he remembered them—straight. With his sharp eye for texture and detail and keen ear for language and timing, he created a narrative that wonderfully captures the flavor of his life and exciting times.