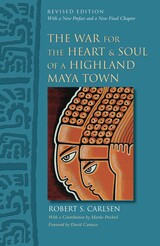 The War for the Heart and Soul of a Highland Maya Town: Revised Edition
by Robert S. Carlsen
contributions by Martín Prechtel
introduction by Davíd Carrasco

This compelling ethnography explores the issue of cultural continuity and change as it has unfolded in the representative Guatemala Mayan town Santiago Atitlán. Drawing on multiple sources, Robert S. Carlsen argues that local Mayan culture survived the Spanish Conquest remarkably intact and continued to play a defining role for much of the following five centuries. He also shows how the twentieth-century consolidation of the Guatemalan state steadily eroded the capacity of the local Mayas to adapt to change and ultimately caused some factions to reject—even demonize—their own history and culture. At the same time, he explains how, after a decade of military occupation known as la violencia, Santiago Atitlán stood up in unity to the Guatemalan Army in 1990 and forced it to leave town.

This new edition looks at how Santiago Atitlán has fared since the expulsion of the army. Carlsen explains that, initially, there was hope that the renewed unity that had served the town so well would continue. He argues that such hopes have been undermined by multiple sources, often with bizarre outcomes. Among the factors he examines are the impact of transnational crime, particularly gangs with ties to Los Angeles; the rise of vigilantism and its relation to renewed religious factionalism; the related brutal murders of followers of the traditional Mayan religion; and the apocalyptic fervor underlying these events.

Robert S. Carlsen recently retired from the Department of Anthropology at the University of Colorado, where he taught for twenty years, and is now an independent researcher. He conducted twenty-five years of field research in Atitlán, where he learned Tz'utujil, was accepted in a local cofradía (Mayan/Catholic religious society), and was a firsthand witness to la violencia.