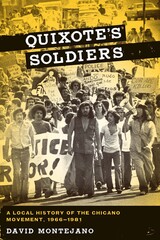 In the mid-1960s, San Antonio, Texas, was a segregated city governed by an entrenched Anglo social and business elite. The Mexican American barrios of the west and south sides were characterized by substandard housing and experienced seasonal flooding. Gang warfare broke out regularly. Then the striking farmworkers of South Texas marched through the city and set off a social movement that transformed the barrios and ultimately brought down the old Anglo oligarchy. In Quixote's Soldiers, David Montejano uses a wealth of previously untapped sources, including the congressional papers of Henry B. Gonzalez, to present an intriguing and highly readable account of this turbulent period.

Montejano divides the narrative into three parts. In the first part, he recounts how college student activists and politicized social workers mobilized barrio youth and mounted an aggressive challenge to both Anglo and Mexican American political elites. In the second part, Montejano looks at the dynamic evolution of the Chicano movement and the emergence of clear gender and class distinctions as women and ex-gang youth struggled to gain recognition as serious political actors. In the final part, Montejano analyzes the failures and successes of movement politics. He describes the work of second-generation movement organizations that made possible a new and more representative political order, symbolized by the election of Mayor Henry Cisneros in 1981.

David Montejano, a native San Antonian, is Professor of Ethnic Studies at the University of California, Berkeley. His fields of specialization include community studies, historical and political sociology, and race and ethnic relations. He is the author of the award-winning Anglos and Mexicans in the Making of Texas, 1836–1986 and the editor of Chicano Politics and Society in the Late Twentieth Century.