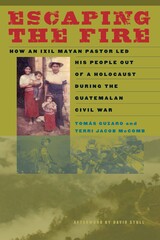 During the height of the Guatemalan civil war, Tomás Guzaro, a Mayan evangelical pastor, led more than two hundred fellow Mayas out of guerrilla-controlled Ixil territory and into the relative safety of the government army's hands. This exodus was one of the factors that caused the guerrillas to lose their grip on the Ixil, thus hastening the return of peace to the area.

In Escaping the Fire, Guzaro relates the hardships common to most Mayas and the resulting unrest that opened the door to civil war. He details the Guatemalan army's atrocities while also describing the Guerrilla Army of the Poor's rise to power in Ixil country, which resulted in limited religious freedom, murdered church leaders, and threatened congregations. His story climaxes with the harrowing vision that induced him to guide his people out of their war-torn homeland.

Guzaro also provides an intimate look at his spiritual pilgrimage through all three of Guatemala's main religions. The son of a Mayan priest, formerly a leader in the Catholic Church, and finally a convert to Protestantism, Guzaro, in detailing his religious life, offers insight into the widespread shift toward Protestantism in Latin America over the past four decades.

Riveting and highly personal, Escaping the Fire ultimately provides a counterpoint to the usual interpretation of indigenous agency during the Guatemalan civil war by documenting the little-studied experiences of Protestants living in guerrilla-held territory.

Tomás Guzaro played a central role in aiding the Ixil refugees during the Guatemalan civil war and since 1987 has been the administrator of a private hospital in Nebaj, where he served as vice mayor from 2000 to 2004. He currently oversees ninety-six churches within the Church of God.

After moving to Nebaj in 1993, Terri Mccomb and her husband got to know Tomás Guzaro while working with agricultural development programs. They still live in Ixil country, where Terri divides her time between schooling her four children and writing.