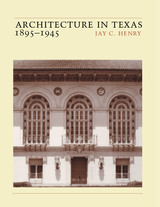 More than just a catalog of buildings and styles, the book is a social history of Texas architecture. Jay C. Henry discusses and illustrates buildings from around the state, drawing a majority of his examples from the ten to twelve largest cities and from the work of major architects and firms, including C. H. Page and Brother, Trost and Trost, Lang and Witchell, Sanguinet and Staats, Atlee B. and Robert M. Ayres, David Williams, and O'Neil Ford. The majority of buildings he considers are public ones, but a separate chapter traces the evolution of private housing from late-Victorian styles through the regional and international modernism of the 1930s. Nearly 400 black-and-white photographs complement the text.

Written to be accessible to general readers interested in architecture, as well as to architectural professionals, this work shows how Texas both participated in and differed from prevailing American architectural traditions.

AUTHOR BIOGRAPHY
The late Jay C. Henry was a professor in the School of Architecture at the University of Texas at Arlington.
REVIEWS
Written in an accessible style, Henry's work places Texas architecture in the wider context of American architectural history by tracing the development of building in the state from late Victorian styles, and the rise of neoclassicism, to the advent of the International Style.... His work provides a welter of new facts, both about the era's buildings and the architects who designed them, and he has catalogued and described most of the important landmarks of the period.
— Southwestern Historical Quarterly

...a significant contribution to the study of Texas architecture....
— Drury Blakeley Alexander, author of Texas Homes of the Nineteenth Century