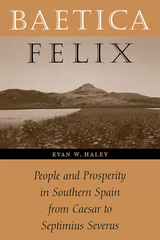 BUY FROM
Baetica Felix: People and Prosperity in Southern Spain from Caesar to Septimius Severus
by Evan W. Haley
University of Texas Press, 2003
eISBN: 978-0-292-79779-6
Paper: 978-0-292-72226-2
Baetica, the present-day region of Andalusia in southern Spain, was the wealthiest province of the Roman Empire. Its society was dynamic and marked by upward social and economic mobility, as the imperial peace allowed the emergence of a substantial middle social and economic stratum. Indeed, so mutually beneficial was the imposition of Roman rule on the local population of Baetica that it demands a new understanding of the relationship between Imperial Rome and its provinces. Baetica Felix builds a new model of Roman-provincial relations through a socio-economic history of the province from Julius Caesar to the end of the second century A.D. Describing and analyzing the impact of Roman rule on a core province, Evan Haley addresses two broad questions: what effect did Roman rule have on patterns of settlement and production in Baetica, and how did it contribute to wealth generation and social mobility? His findings conclusively demonstrate that meeting the multiple demands of the Roman state created a substantial freeborn and ex-slave "middle stratum" of the population that outnumbered both the super-rich elite and the destitute poor.
AUTHOR BIOGRAPHY
Evan W. Haley is Associate Professor of History and Classics at McMaster University in Hamilton, Ontario, Canada.
TABLE OF CONTENTS