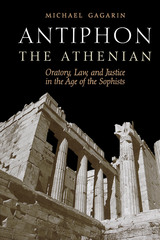 Winner, Friends of the Dallas Public Library Award from the Texas Institute of Letters, 2003

Antiphon was a fifth-century Athenian intellectual (ca. 480-411 BCE) who created the profession of speechwriting while serving as an influential and highly sought-out adviser to litigants in the Athenian courts. Three of his speeches are preserved, together with three sets of Tetralogies (four hypothetical paired speeches), whose authenticity is sometimes doubted. Fragments also survive of intellectual treatises on subjects including justice, law, and nature (physis), which are often attributed to a separate Antiphon the Sophist. Were these two Antiphons really one and the same individual, endowed with a wide-ranging mind ready to tackle most of the diverse intellectual interests of his day?

Through an analysis of all these writings, this book convincingly argues that they were composed by a single individual, Antiphon the Athenian. Michael Gagarin sets close readings of individual works within a wider discussion of the fifth-century Athenian intellectual climate and the philosophical ferment known as the sophistic movement. This enables him to demonstrate the overall coherence of Antiphon's interests and writings and to show how he was a pivotal figure between the sophists and the Attic orators of the fourth century. In addition, Gagarin's argument allows us to reassess the work of the sophists as a whole, so that they can now be seen as primarily interested in logos (speech, argument) and as precursors of fourth-century rhetoric, rather than in their usual role as foils for Plato.

AUTHOR BIOGRAPHY
Michael Gagarin is James R. Dougherty, Jr. Centennial Professor of Classics at the University of Texas at Austin.
REVIEWS
"Gagarin demonstrates persuasively that Antiphon the logographer is identical with the Antiphon who made intellectual contributions on more abstract topics."
— Mervin R. Dilts, Professor of Classics, New York University