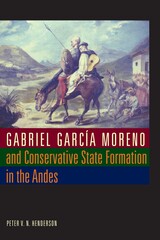 This book explores the life and times of Ecuador's most controversial politician within the broader context of the new political history, addressing five major themes of nineteenth-century Latin American history: the creation of political networks, the divisiveness of regionalism, the bitterness of the liberal-conservative ideological divide, the complicating problem of caudillismo, and the quest for progress and modernization.

Two myths traditionally associated with García Moreno's rule are debunked. The first is that he created a theocracy in Ecuador. Instead, the book argues that he negotiated a concordat with the Papacy giving the national government control over the church's secular responsibilities, and subordinated the clergy, many of whom were highly critical of García Moreno, to the conservative state. A second, frequently repeated generalization is that he created a conservative dictatorship out of touch with the liberal age in which he lived. Instead, the book argues that moderates held sway during the first nine years of García Moreno's period of influence, and only during his final term did he achieve the type of conservative state he thought necessary to advance his progressive nation-building agenda.

In sum, this book enriches our understanding of many of the notions of state formation by suggesting that conservatives like García Moreno envisioned a program of material progress and promoting national unity under a very different formula from that of nineteenth-century liberals.

Peter V. N. Henderson is Professor of History at Winona State University in Minnesota. He is author of, most recently, In the Absence of Don Porfirio: Francisco León de la Barra and the Mexican Revolution.