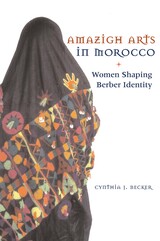 In southeastern Morocco, around the oasis of Tafilalet, the Ait Khabbash people weave brightly colored carpets, embroider indigo head coverings, paint their faces with saffron, and wear ornate jewelry. Their extraordinarily detailed arts are rich in cultural symbolism; they are always breathtakingly beautiful—and they are typically made by women. Like other Amazigh (Berber) groups (but in contrast to the Arab societies of North Africa), the Ait Khabbash have entrusted their artistic responsibilities to women. Cynthia Becker spent years in Morocco living among these women and, through family connections and female fellowship, achieved unprecedented access to the artistic rituals of the Ait Khabbash. The result is more than a stunning examination of the arts themselves, it is also an illumination of women's roles in Islamic North Africa and the many ways in which women negotiate complex social and religious issues.

One of the reasons Amazigh women are artists is that the arts are expressions of ethnic identity, and it follows that the guardians of Amazigh identity ought to be those who literally ensure its continuation from generation to generation, the Amazigh women. Not surprisingly, the arts are visual expressions of womanhood, and fertility symbols are prevalent. Controlling the visual symbols of Amazigh identity has given these women power and prestige. Their clothing, tattoos, and jewelry are public identity statements; such public artistic expressions contrast with the stereotype that women in the Islamic world are secluded and veiled. But their role as public identity symbols can also be restrictive, and history (French colonialism, the subsequent rise of an Arab-dominated government in Morocco, and the recent emergence of a transnational Berber movement) has forced Ait Khabbash women to adapt their arts as their people adapt to the contemporary world. By framing Amazigh arts with historical and cultural context, Cynthia Becker allows the reader to see the full measure of these fascinating artworks.