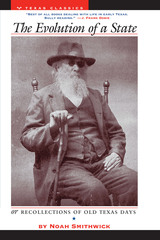 "I was but a boy in my nineteenth year, and in for adventure when I started out from Hopkinsville, Kentucky, with all my worldly possessions, consisting of a few dollars in money, a change of clothes, and a gun, of course, to seek my fortune in this lazy man's paradise."

Noah Smithwick was an old man, blind and near his ninetieth year, when his daughter recorded these words. He had stayed on in "paradise"—Texas—from 1827 to 1861, when his opposition to secession took him to California. The Evolution of a State is his story of these "old Texas days."

A blacksmith and a tobacco smuggler, Noah Smithwick made weapons for the Battle of Concepción, and he fought in that battle. With Hensley's company, he chased the Mexican army south of the Rio Grande after the Battle of San Jacinto. Twice he served with the Texas Rangers. In quieter times, he was a postmaster and justice of the peace in little Webber's Prairie.

Eyewitness to so much Texas history, Smithwick recounts his life and adventures in a simple, straightforward style, with a wry sense of humor. His keen memory for detail—what the people wore, what they ate, how they worked and played— vividly evokes the sights, sounds, and smells of the frontier.

First published in part by the Dallas Morning News, Smithwick's recollections gained such popularity that they were published in book form, as The Evolution of a State, in 1900. This new edition of a Texas classic makes widely available for the first time in many years this "best of all books dealing with life in early Texas."

AUTHOR BIOGRAPHY
After his Texas years, Noah Smithwick (1808–1899) spent the rest of his life in California. He was one of the first members of the Texas State Historical Association.
TABLE OF CONTENTS