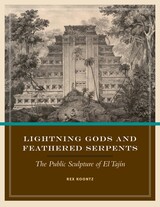 El Tajín, an ancient Mesoamerican capital in Veracruz, Mexico, has long been admired for its stunning pyramids and ballcourts decorated with extensive sculptural programs. Yet the city's singularity as the only center in the region with such a wealth of sculpture and fine architecture has hindered attempts to place it more firmly in the context of Mesoamerican history. In Lightning Gods and Feathered Serpents, Rex Koontz undertakes the first extensive treatment of El Tajín's iconography in over thirty years, allowing us to view its imagery in the broader Mesoamerican context of rising capitals and new elites during a period of fundamental historical transformations.

Koontz focuses on three major architectural features—the Pyramid of the Niches/Central Plaza ensemble, the South Ballcourt, and the Mound of the Building Columns complex—and investigates the meanings of their sculpture and how these meanings would have been experienced by specific audiences. Koontz finds that the iconography of El Tajín reveals much about how motifs and elite rites growing out of the Classic period were transmitted to later Mesoamerican peoples as the cultures centered on Teotihuacan and the Maya became the myriad city-states of the Early Postclassic period.

By reexamining the iconography of sculptures long in the record, as well as introducing important new monuments and contexts, Lightning Gods and Feathered Serpents clearly demonstrates El Tajín's numerous iconographic connections with other areas of Mesoamerica, while also exploring its roots in an indigenous Gulf lowlands culture whose outlines are only now emerging. At the same time, it begins to uncover a largely ignored regional artistic culture of which Tajín is the crowning achievement.

Rex Koontz is Associate Professor of Art History at the University of Houston. He has published two previous books, Landscape and Power in Ancient Mesoamerica (with Kathryn Reese-Taylor and Annabeth Headrick) and Mexico: From the Olmecs to the Aztecs (fifth edition with Michael D. Coe).

I find this book to be a superior piece of scholarship in every way.