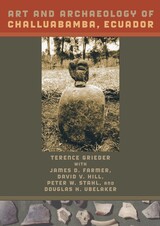 Challuabamba (chī-wa-bamba)—now a developing suburb of Cuenca, the principal city in the southern highlands of Ecuador—has been known for a century as an ancient site that produced exceptionally fine pottery in great quantities. Suspecting that Challuabamban ceramics might provide a link between earlier, preceramic culture and later, highly developed Formative period art, Terence Grieder led an archaeological investigation of the site between 1995 and 2001. In this book, he and the team of art historians and archaeologists who excavated at Challuabamba present their findings, which establish the community's importance as a center in a network of trade and artistic influence that extended to the Amazon River basin and the Pacific Coast.

Art and Archaeology of Challuabamba, Ecuador presents an extensive analysis of ceramics dating to 2100-1100 BC, along with descriptions of stamps and seals, stone and shell artifacts, burials and their offerings, human remains, and zooarchaeology. Grieder and his coauthors demonstrate that the pottery of Challuabamba fills a gap between early and late Formative styles and also has a definite connection with later highland styles in Peru. They draw on all the material remains to reconstruct the first clear picture of Challuabamba's prehistory, including agriculture and health, interregional contacts and exchange, red-banded incised ware and ceramic production, and shamanism and cosmology.

Because southern Ecuador has received relatively little archaeological study, Art and Archaeology of Challuabamba, Ecuador offers important baseline data for what promises to be a key sector of the prehistoric Andean region.

Terence Grieder was Professor Emeritus of the History of Art at the University of Texas at Austin.

James D. Farmer is Chair of the Department of Art History at Virginia Commonwealth University in Richmond.

David V. Hill holds a Ph.D. in Anthropology from the University of Texas at Austin. He is an archaeological consultant living in Golden, Colorado.

Peter W. Stahl is Professor of Anthropology at SUNY, Binghamton.

Douglas H. Ubelaker is Curator of Physical Anthropology at the Smithsonian Institution in Washington, D.C.